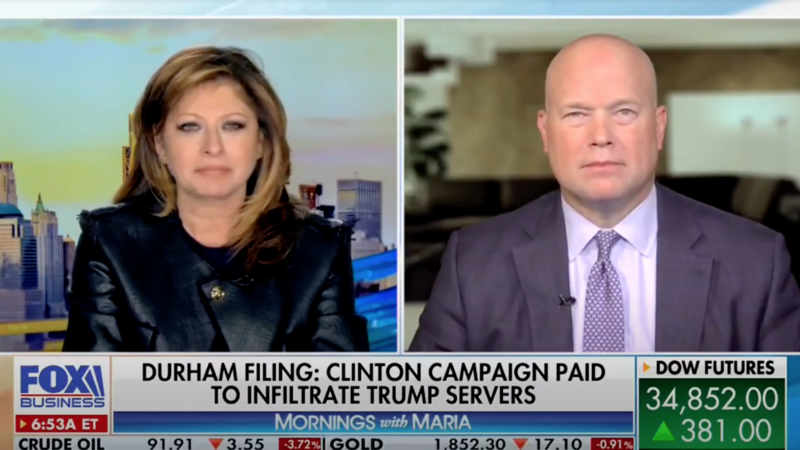 Maria Bartiromo [00:00:00] In fact, that's exactly what he had a line into the FBI where Hillary Clinton was feeding nonsense to the FBI, triggering an investigation into her political opponent. Special Counsel John Durham's new filing on Friday night shows and proves that the Clinton campaign actually paid a government contract, a technology company, NuSTAR, to intercept and spy on President Trump. Mining data not just from his office at Trump Tower or his Central Park apartment, Central Park West apartment building in New York City, but also while he was president in the Oval Office. Joining me right now is Matt Whitaker, former US acting Attorney General A.G. Whitaker. It's great to see you. Thanks very much for being here, and we've spoken about this many times over the years. You say Jake Sullivan's fingerprints are all over this.

Matt Whitaker [00:00:47] They are I mean, if you listen to that clip, you know, he laid out exactly what they were trying to do, which is they knew Hillary Clinton was being investigated by the FBI and they desperately needed a counter investigation. And so they created this narrative out of complete fiction. And remember that ultimately, this connection between AlphaBay and the Trump campaign, or Trump Tower was marketing emails for the Trump Winery and hotel. And so this is this is not the crime of the century, and there were no crimes committed. In fact, if you listen to what Ratcliffe has said, the former DNI. You know, he said that he handed over enough information to Durham to have many people indicted at that time. And you know, that was over a year ago now. So, you know, I think there's still a lot to go in this Maria.

Maria Bartiromo [00:01:35] Well, look, you're absolutely right. John Ratcliffe and Devin Nunes have been the leading truth tellers in America. They joined me on Sunday Morning Futures throughout 2017 18 19 and told us every Sunday when he when they were on Sunday Morning Futures. This is a lie. This is not true. And yet the media went and drove the bus on this and half the country, more than half the country for a time thought Trump colluded with Russia. I mean, extraordinary. You and I talked about this, and we both agreed. It was nonsense. Former Clinton campaign land Michael Sussman is one of three people who have been indicted already. He pled not guilty after being charged with making false statements to a federal judge in September. His attorneys are claiming that the allegations are, quote, plainly intended to politicize this case, inflame media coverage and taint the jury pool. Your reaction?

Matt Whitaker [00:02:30] Well, it's doing quite the opposite, there is no media coverage, especially in the mainstream media, The Washington Post, New York Times and all of the networks do not want to correct the record on this story. They have no desire to go to the truth. Remember, The Washington Post received the Pulitzer Prize for their coverage of this false narrative. And so, you know, I think ultimately this is why we have our justice system is to get the truth and to have a jury decide.

Mike Turner [00:03:18] I think that this is going to lead in the end to Brennan, Clapper and Comey, I think that what we see is not just political shenanigans or opposition research that you would see in the normal, you know, campaigns where people are trying to find information out about their opponents.

Matt Whitaker [00:03:37] Well, false statements to congressional investigators are the same as a false statement to the FBI, so I would fully expect to see that if those statements that they made in their testimony and in private meetings were false, that Durham will pursue it.

Maria Bartiromo [00:03:53] Yeah, there are conspiracy charges coming. I understand. AG Matt Whitaker, great to see you. Thank you. We'll be right back with more mornings with Maria.