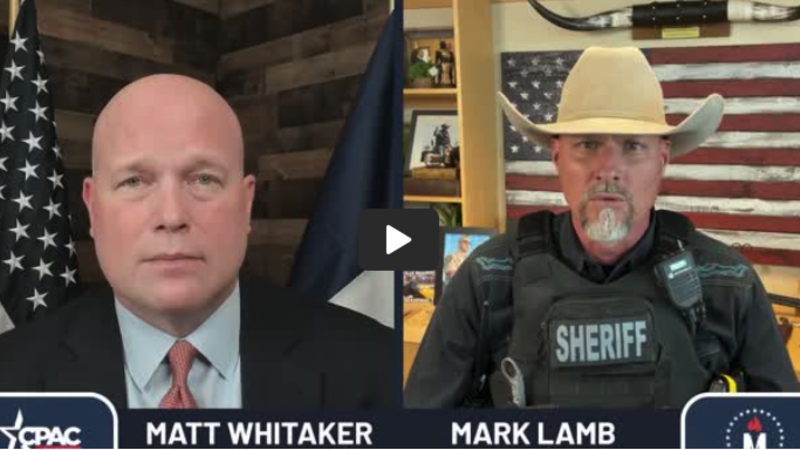 National Police Week occurs every May, and in 2022 we will be commemorating it with live, in-person events. National Police Week will be observed from May 11–17. The National Law Enforcement Memorial and Museum will hold ceremonies, including the 34th Annual Candlelight Vigil, to honor the fallen officers whose names have recently been added to the Memorial.

Mark Lamb was elected as the 24th Sheriff of Pinal County on January 1st, 2017. Sheriff Lamb oversees a county the size of Connecticut and manages nearly 500 employees within the department.

Sheriff Mark Lamb has both experience in law enforcement and the private sector. He trained with the Maricopa County Sheriff’s Office Deputy Academy and was named Valedictorian of his class. He was hired by the Salt River Pima-Maricopa Indian Community, where he excelled as a police officer and was named Rookie of the Year. The following year, he received the Officer of the Year award. He was later promoted as a Detective to the Gang Enforcement Unit and in his first year was named Detective of the Year.

The quality of Mark’s work was rewarded by his involvement in a wide variety of law enforcement actions. Mark has participated in DUI task force details and gang suppression, and he has investigated multiple drive-by shootings, drug cases, assault and aggravated assault cases, and homicides. Mark has also worked Federal cases, State cases, and Tribal cases. He later joined the Pinal County Sheriff’s Office as a deputy to better serve his community.

His varied background was on full display when Mark was named one of the lead detectives on a multi-agency (Salt River PD, Mesa PD, DPS, ATF, US Marshal Service and the FBI) Federal RICO case that disrupted and dismantled one of the most violent gangs in the East Valley. As a result of this successful case, Mark received the Award of Excellence from the Arizona Gang Investigators Association.

As a constitutional conservative, Mark has strong convictions and is courageous in fighting for the citizens he serves. Mark believes strongly in our Republic and our Constitution, he is a strong supporter of our 2nd Amendment rights and the enforcement of all of our laws, including those that pertain to fighting illegal immigration, and he is determined to protect the rights and freedoms of the people whom he serves.

Sheriff Huey “Hoss” Mack was born in Escambia County, Alabama and moved to Baldwin County when he was six months old.
Sheriff Mack attended Faulkner State Community College and graduated with an Associate Degree in Criminal Justice.  While at Faulkner he was a Student Government Association Representative.  He then attended and graduated from Troy University with a Bachelors Degree in Criminal Justice.  He later returned to Troy and earned a Masters Degree in Human Resource Management.

Sheriff Mack was hired by the Baldwin County Sheriff's Office in 1989 as a Criminal Investigator and was tasked with Crime Scene responsibilities.  In 1995 he was promoted to the rank of Lieutenant over the Criminal Investigation Division.  In 2004 he was promoted to the rank of Captain and designated the Chief Investigator of the Criminal Investigation Division.  He has served on many task forces to include the US Customs Blue Lighting Task Force, a US Marshall Special Deputy, Baldwin County Major Crimes Task Force, Child Abuse Task Force and as a consultant with many other law enforcement agencies.

Matthew G. Whitaker was acting Attorney General of the United States (2018-2019).  Prior to becoming acting Attorney General, Mr. Whitaker served as Chief of Staff to the Attorney General. He was appointed as the U.S. Attorney for the Southern District of Iowa by President George W. Bush, serving from 2004-2009. Whitaker was the managing partner of Des Moines based law firm, Whitaker Hagenow & Gustoff LLP from 2009 until rejoining DOJ in 2017. He was also the Executive Director for FACT, The Foundation for Accountability & Civic Trust, an ethics and accountability watchdog, between 2014 and 2017.   Mr. Whitaker is Author of the book--Above the Law, The Inside Story of How the Justice Department Tried to Subvert President Trump.

Mr. Whitaker graduated with a Master of Business Administration, Juris Doctor, and Bachelor of Arts from the University of Iowa.  While at Iowa, Mr. Whitaker was a three-year letterman on the football team where he received the prestigious Big Ten Medal of Honor.

Mr. Whitaker is now a Co-Chair of the Center for Law and Justice at America First Policy Institute and  a Senior Fellow at the American Conservative Union Foundation. Matt is on the Board of Directors for America First Legal Foundation and is a Senior Advisor to IronGate Capital Advisors. He is also Of Counsel with the Graves Garrett law firm.  Whitaker appears regularly to discuss legal and political issues on Fox News, Newsmax and other news outlets.  He splits his time between Iowa, Florida and Washington, D.C.

Liberty & Jusice E14 by N/A is licensed under Whitaker.TV N/A