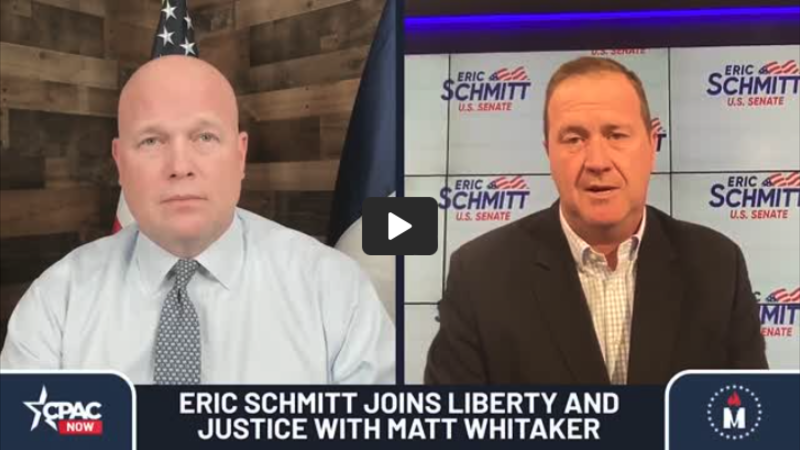 N/A by N/A is licensed under N/A N/A
Eric Schmitt, Missouri Attorney General and candidate for US Senate in Missouri is this week’s guest on Liberty & Justice with Matt Whitaker.  Eric and Matt discuss important law and order issues and the challenges that face our country and how they can be solved.

Eric Schmitt is Missouri’s 43rd Attorney General and chief legal and law enforcement official. A lifelong, sixth-generation Missourian, Eric is driven by his constitutional conservative beliefs, which he applies every day as the lawyer for all six million Missourians.  Eric has proven over and over that he will boldly defend the rule of law. He has remained the leader Missourians can count on.

Eric and his wife Jaime have three children: Stephen, Sophia and Olivia. Their son, Stephen was born with a rare genetic condition causing tumors on his organs. He also has epilepsy, is on the autism spectrum, and is non-verbal.  Eric’s son was his inspiration to run for office to be a voice for individuals like him and their families. One of Eric’s early legislative victories was taking on insurance companies by leading a bipartisan effort to ensure Missouri families are covered when they need it the most – including therapies for autism.

As Missouri Attorney General, Eric launched multiple major initiatives to better the lives of Missourians across the state. In his first month in office, Eric launched his Safer Streets Initiative, featuring unprecedented cooperation between the U.S Attorney’s Office and the Attorney General’s Office, taking on violent crime across the state. Recently, Eric has launched his Office’s first Cold Case Unit to deliver justice to victims who have waited far too long.

Eric has also been committed to tackling the opioid crisis and launched the Real Opioid Pain initiative to hear from Missouri citizens who have been impacted by this crisis and is battling Big Pharma in court. To address the backlog of untested sexual assault kits, Eric launched the SAFE Kit initiative to bring justice for the brave individuals who came forward to tell their stories.

During Trump’s Presidency, Eric took the lead on backing up the Administration’s policies. Eric was the first Attorney General to sue China to hold them accountable for unleashing the coronavirus on Americans. When Facebook was canceling conservatives and Google was using their platform to hurt consumers and businesses, Eric filed a lawsuit and launched a massive antitrust probe to stop Big Tech abuses. When voter integrity came into question, Eric authored and led the brief supporting the Pennsylvania Republican Party against the unconstitutional actions of the Pennsylvania courts, and he authored and led a brief in support of Texas’ lawsuit against Georgia, Michigan, Pennsylvania and Wisconsin before the United States Supreme Court, where 17 other states to joined him.

Since Joe Biden has taken over the White House, Eric has been one of the leading state attorneys general to hold the Biden administration accountable, protect the Constitution and the America First Agenda. He has been on the front lines of every fight President Biden has waged against our jobs, our freedoms, and our safety. When President Biden canceled the Keystone XL Pipeline and thousands of jobs with it, Eric demanded it be reinstated and filed suit. When President Biden and John Kerry circumvented the Constitution to set a “social cost” on greenhouse gases, a move that would cost not thousands but millions of jobs, destroy the energy and agriculture industries, and lower the standard of living for working families, Eric immediately sued him. When Joe Biden halted Operation Talon endangering American lives, Eric pushed back against President Biden, urging him to reverse his order.

Eric’s love for the Constitution – the bedrock of America’s legal system – inspired him to teach a course on American Civics. Eric taught “21st Century American Civics” at his alma mater, Saint Louis University, where students had the opportunity to study the evolution of political thought, the American Enlightenment and to explore leadership qualities necessary to solve the big issues facing America today and in the future.

Previously, Missourians elected Eric as their 46th State Treasurer.  Before serving as Treasurer, he was elected twice to represent the state’s 15th Senate District as a Missouri Senator where he authored two of the largest tax cuts in state history, championed the landmark legislation to end the unjust practice of taxation by citation and was a staunch defender of life and the Second Amendment.

Matthew G. Whitaker was acting Attorney General of the United States (2018-2019).  Prior to becoming acting Attorney General, Mr. Whitaker served as Chief of Staff to the Attorney General. He was appointed as the U.S. Attorney for the Southern District of Iowa by President George W. Bush, serving from 2004-2009. Whitaker was the managing partner of Des Moines based law firm, Whitaker Hagenow & Gustoff LLP from 2009 until rejoining DOJ in 2017. He was also the Executive Director for FACT, The Foundation for Accountability & Civic Trust, an ethics and accountability watchdog, between 2014 and 2017.   Mr. Whitaker is Author of the book--Above the Law, The Inside Story of How the Justice Department Tried to Subvert President Trump.

Mr. Whitaker graduated with a Master of Business Administration, Juris Doctor, and Bachelor of Arts from the University of Iowa.  While at Iowa, Mr. Whitaker was a three-year letterman on the football team where he received the prestigious Big Ten Medal of Honor.

Mr. Whitaker is now a Co-Chair of the Center for Law and Justice at America First Policy Institute and  a Senior Fellow at the American Conservative Union Foundation. Matt is on the Board of Directors for America First Legal Foundation and is a Senior Advisor to IronGate Capital Advisors. He is also Of Counsel with the Graves Garrett law firm.  Whitaker appears regularly to discuss legal and political issues on Fox News, Newsmax and other news outlets.  He splits his time between Iowa, Florida and Washington, D.C.
N/A by N/A is licensed under N/A N/A