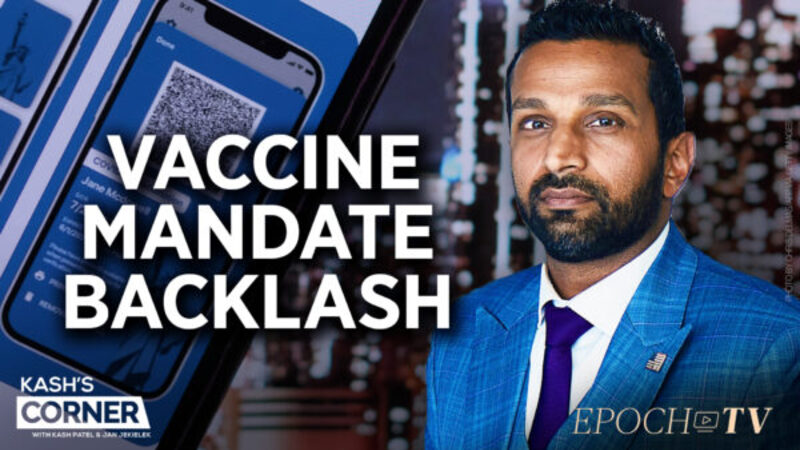 The full U.S. intelligence community report on COVID-19 origins “needs to be declassified and put out for the American people to read, and not just the report, but the underlying intelligence cables and information that was used,” says Kash Patel.

Kash Patel and Jan Jekielek sit down to discuss the recent intelligence community assessment and how court battles on vaccine mandates might play out.
Kash Patel: Hey, everybody, welcome back to Kash’s Corner.

Jan Jekielek: So, Kash, I was looking at this recent Trafalgar poll then by Convention of States, basically talking about how Americans think about vaccine mandates.
Certainly Independents and Republicans are very significantly against vaccine mandates and it’s a significant number, over 50 percent overall, but also that it sets a kind of a dangerous precedent, even for future presidents, whatever political orientation they may have.

Mr.Patel: I kind of agree. Overall, back when I was the chief of staff for the Department of Defense, we were charged with operation Warp Speed, which is you recall was literally running the logistical apparatus to get and distribute the vaccine out to America because no other component of the U.S. government could do it and you couldn’t leave it to private industry.
Mr. Jekielek: But wait. Wasn’t Warp Speed actually the creation of the vaccine or I’m mixing?

Mr. Patel: It’s both, right? Yeah. It was the creation of the vaccine and private industry. And then, we at the Defense Department took Warp Speed and used our logistical apparatus to basically be the node that delivers it to every state that wanted it, right?

And again, back then, we weren’t forcing it on states and people, we were recommending people take it. And I still to this day, like President Trump’s say, I recommend you should get the vaccine, but I agree that it shouldn’t be mandated because we’re walking on a dangerous line.

This poll is significant because it shows that most people don’t want this thing mandated on them. I think the folks that want it mandated would have a different argument if the overwhelming majority of Americans said, “That’s fine, we want it mandated for everybody.” But that’s clearly not the case.