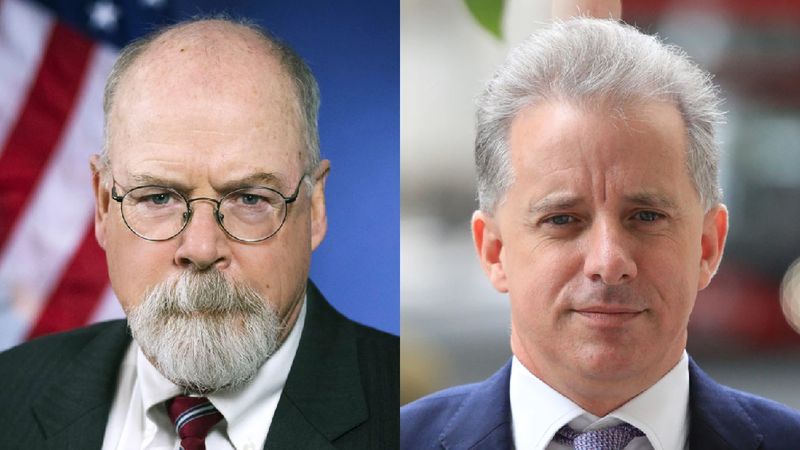 N/A by N/A is licensed under N/A N/A
Christopher Steele looms large over John Durham’s trial against Michael Sussmann as the special counsel says the dossier author is at the “intersection” of Trump-Russia collusion efforts, while the Democratic lawyer calls the evidence about him an unfair “lightning rod.”

Sussmann was indicted in September for allegedly concealing his clients (Hillary Clinton's 2016 campaign and “Tech Executive-1” Rodney Joffe) from FBI general counsel James Baker in September 2016 when he presented internet data that suggested a now-discredited back-channel link between the Trump Organization and Russia’s Alfa Bank. He has pleaded not guilty.

His lawyer Sean Berkowitz spoke about Steele during a Wednesday court hearing, arguing that “invoking even his name is a lightning rod” and that “even the implication of Mr. Steele’s name we think would be unduly prejudicial.”

Durham prosecutor Andrew DeFilippis said Steele is on the government’s witness list but is unlikely to testify because he is overseas. He said the prosecution would likely only introduce “limited” evidence on Steele, but repeatedly pointed to the “strong intersection” of Steele’s efforts and the Alfa Bank efforts. He said Sussmann met with Steele in the summer of 2016, and then Steele was immediately tasked by the opposition research firm Fusion GPS with researching Alfa Bank, which he did.

Steele created his now-discredited dossier after being hired by Fusion, which was itself hired by Perkins Coie and Marc Elias, the general counsel for Clinton’s campaign. Sussmann worked for Perkins at the time too, and both he and Elias met with Steele in 2016.

Steele testified in a British court that Sussmann provided him with other claims about Alfa Bank’s purported ties to Russian President Vladimir Putin during a late July 2016 meeting. These allegations made their way into a September 2016 memo that became part of the dossier.

DeFilippis said Wednesday that Sussmann’s meeting with Steele is “incredibly probative and relevant” because the meeting shows that Sussmann was “integrated” with the broader effort. He said the prosecution’s goal is to show “the intersection between Mr. Steele’s efforts and the Russian Bank-1” claims.

DeFilippis said Wednesday that Sussmann’s meeting with Steele is “incredibly probative and relevant” because the meeting shows that Sussmann was “integrated” with the broader effort. He said the prosecution’s goal is to show “the intersection between Mr. Steele’s efforts and the Russian Bank-1” claims.

Elias testified that he was aware of Fusion’s plans to have Steele brief reporters about his anti-Trump research during the 2016 contest, met with Steele during 2016, and periodically briefed the campaign about the findings from Fusion and Steele. Elias coordinated with Sussmann on anti-Trump research in 2016.

Sussmann’s lawyers asked a federal judge last month to exclude evidence on “Christopher Steele and information he separately provided to the Federal Bureau of Investigation (including the so-called ‘Steele Dossier’).”

The lawyers argued Sussmann did not have “any awareness” that Steele was “separately providing information to the FBI.”

Durham said Joffe also began tasking employees and associates with mining and assembling internet data that would support an “inference” or “narrative” tying Trump to Russia, with the tech executive stating in emails that the goal was to please “VIPs” — apparently referring to Sussmann, Elias, and the Clinton campaign.

The special counsel referred to this as a “joint venture” last month and laid out evidence that Sussmann “took further steps to integrate the Russian Bank-1-related allegations into the Clinton Campaign’s opposition research efforts,” which included details about Steele.

The special counsel wrote: “Although the defendant [Sussmann] testified before Congress that the purpose of the [2016] meeting was to ‘vet’ U.K. Person-1 for the Clinton Campaign given the defendant’s knowledge of national security matters, U.K. Person-1 has testified under oath in the United Kingdom that, during the meeting, the defendant told him at the meeting about the Russian Bank-1 allegations.”

Horowitz criticized the FBI in his December 2019 report for 17 “significant errors or omissions” — including a reliance on Steele’s discredited dossier.

Steele pushed the claim that Alfa Bank was a secret conduit between Trump campaign manager Paul Manafort and the Kremlin during an early October 2016 meeting with State Department figures Jonathan Winer and Kathleen Kavalec. Steele also told DOJ official Bruce Ohr in late September 2016 that the Alfa Bank server was a link to the Trump campaign.

Steele’s alleged main source, Igor Danchenko, was charged “with five counts of making false statements to the FBI,” which Durham says he made about the information he provided to Steele for the dossier. Horowitz said FBI interviews with Danchenko “raised significant questions about the reliability of the Steele election reporting” and concluded Danchenko “contradicted the allegations of a ‘well-developed conspiracy’ in” Steele’s dossier.

The Clinton campaign and the Democratic National Committee were recently fined by the FBI over their financial filings related to Fusion GPS, which Durham pointed out this week. Steele continues to defend his dossier.

The FBI, the CIA, special counsel Robert Mueller, a bipartisan Senate Intelligence Committee investigation, and Durham’s team have all cast doubt on or shot down the Alfa Bank claims.

This article originally appeared in The Washington Examiner.
N/A by N/A is licensed under N/A N/A